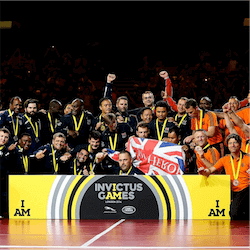 New Zealand sports betting enthusiasts will be celebrating the unconquerable human spirit in September, when Toronto hosts the third Invictus Games. New Zealand will once again send a team of active service members and military veterans to the tournament.

The Invictus Games were instigated in 2014 by the UK’s Prince Harry, in response to the USA’s Warrior Games. Like its American counterpart, the competition honours armed forces personnel who are injured or wounded, competing in Paralympic-style events.

The first Invictus Games, involving athletes from 13 nations that have fought alongside the UK, were held in London’s Queen Elizabeth Olympic Park in 2014. The opening was attended by Prince Charles and the Duchess of Cornwall, Prince Harry and Prince William, and Frederick, Crown Prince of Denmark. Michelle Obama also provided a recorded message.

The then-US First Lady was on hand in person to open the 15-nation Invictus Games in Orlando, Florida last year, along with Prince Harry and former president George W. Bush.

New Zealand did not do as well as they did in 2014, which saw a yield of six medals: three silvers and three bronzes. In Orlando, however, the team managed a gold from Glenn Barnes in the one-minute row, a silver from Amy Baynes in road cycling, and a bronze from Nu Filo in rowing.

The Greater Toronto Area will play host to the 2017 Invictus Games, from 23-30 September, with a wider range of sports and a bigger pool of nations than ever before. There are 17 countries invited to this year’s competition: the UK, Canada, New Zealand, Australia, the USA, France, Italy, the Netherlands, Denmark, Germany, Romania, Estonia, Georgia, Ukraine, Iraq, Afghanistan, and Jordan.