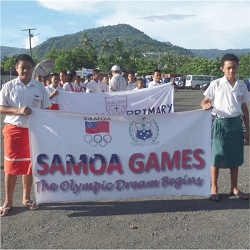 Officials Hopeful that the Rejuvenated Samoa Games will Flourish

Officials are hopeful that more sporting federations will support the Samoa Games going forward. The revived Games kicked off yesterday in Upolu with the athletes taking part walking alongside police officers to the Apia government’s building in order to raise the flag before the official opening ceremonies began.

Weightlifting; archery and athletics were the order of the first day, and the Chief Executive Officer for Samoa’s Association of Sports and National Olympic Committee, Fa’amausili Taiva Ah Young, stated that volleyball; hockey; and cricket were just a few of the other sports that were set to start off today.

Young stated that boxing had regrettably been withdrawn from the competition late in the proceedings, and that basketball; swimming; and rugby union could not be incorporated due to their competing in a variety of both regional and international events taking place while the Samoa Games were on. He went on to state that there was hope that different national federations would get on board as the Games grew, in light of the fact that there are 38 Olympic sports currently registered with the SASNOC. He said that it was hoped that other national federations, which were also Olympic sports, would start being introduced to communities and schools.

He mentioned fencing in particular, going on to say that “they are starting their tournament tomorrow [Tuesday]”, and that, as a new sport for Olympic participation in Samoa, the turnout for the march had been very encouraging.

Young stated that for the last ten years there has been no Samoa Games, and that this was the reason for certain national federations currently not to be taking part. He said that as soon as next year, the games would swell from their current total of just 14 to a far more significant number. He added, however, that the majority of Olympic sport federations that had registered with SASNOC had strenuously been promoting sports in their particular communities.

The Games will continue to play out in Upolu until Thursday, and there are 11 sports that have been registered in Savai’i, who is hosting their event next week.

The Games will continue in Upolu until Thursday with 11 sports registered for Savai’i, which is hosting their event next week.

Samoa’s Minister of Education; Sports and Culture, Loau Keneti Sio, is claiming to be the happiest man in all of Samoa. His delight was evident yesterday as he officially opened the Games, and he spoke in glowing terms of President Fepulea’i Patrick Fepulea’i.