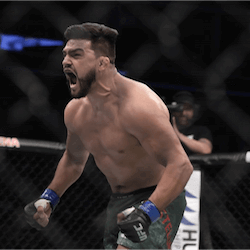 After all was said and done, there wasn’t a whole lot to take away from UFC Shanghai. From the days events we can say that retrospectively, there were more than a few fighters who were not quite qualified to make their debut. However, all that aside, it was the main event, Bisping versus Gastelum that turned out to be the biggest disappointment.

Going into the fight, you would have thought that the former champion would be the favourite, even if he did lose his previous title contest. However, the betting told a completely different story. What fans and punters came to realise, well before the time was that Bisping was heading for yet another bloody defeat.

The only reason Bisping was there was because Anderson Silva failed a USADA drug test. A few weeks ago, the Brit went toe to toe against Gorges St-Pierre in the UFC 217 main event. After first getting dropped by a thumping left hook, Bisping was then chocked unconscious before the referee called an end to the proceedings. Initially the NYSAC had him suspended on medical leave for 30 days.

After undergoing some medical testing, the suspension was reduced to just 7 days, allowing him to fight Gastelum in the UFC Shanghai main event. In hindsight, it would have been better for Bisping’s career and his heath to ride out the 30 days. As the main event got underway, both fighters started feeling each other out, but it was clear that Gastelum’s strikes had far more power. It seemed just a matter of time before the former welterweight would find the right moment to unleash the beast.

We didn’t have to wait long, on a double-punch combo, the second punch completely whipped Bisping’s head backwards, smacking him to the floor into an almost unconscious state. The referee dutifully stepped in to save Bisping from taking any more damage and the fight was over, just like that. After suffering his second TKO defeat in under two weeks, the former UFC middleweight champion was handed a full 60-day suspension by the UFC who self-regulated the Chinese event.

Both Bisping and the UFC have come under fire since the fight, with many people saying that Bisping should not have been allowed to fight Gastelum in the first place. There is a reason suspensions are given after fights and hopefully others can learn from these mistakes. As for Bisping, he plans to end his short career with a bout planned for March next year in London.