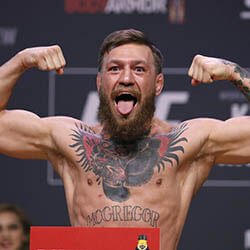 Irish MMA megastar and beloved UFC bad-boy Conor McGregor won’t be emerging out of his supposed retirement any time soon – at least not in 2020. This according to UFC president Dana White in response to McGregor’s recent hinting at returning to the octagon for a potential stand-off with boxing legend Manny Pacquiao.

McGregor in January made 40 seconds’ worth of quick-fire work knocking out Donald Cerrone and announced his retirement from the ring shortly after. And it’s a retirement “decision” that will be fully honoured, said White, at least as far as 2020 is concerned.

White recently on a popular sports opinion podcast discussed rumours of a possible coming out of retirement for McGregor, and though open to the possibility of the Irishman returning to the octagon to fight in 2021, he seemed determined to keep the MMA star from even getting remotely close for the remainder of the current year.

In addition to his having hinted heavily and shamelessly at being granted a go at challenging Pacquiao, McGregor obviously has his sites set firmly on dethroning the likes of Nate Diaz too. The hot-headed Irish fighter’s future has been everything but organised ever since he landed a multi-million payday as a result of his money-fight opposite Floyd Mayweather back in 2017. No longer hard-pressed to do whatever necessary to carve out a comfortable living, McGregor seems to be under the impression that he now gets to call the shots at White’s UFC – even to the point of his having previously pulled a few stunts trying to manipulate White into offering him shares.