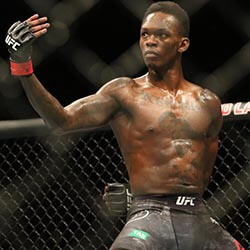 Israel Adesanya, the Nigerian-born New Zealander Mixed Martial Artist based in Auckland, has called on his fellow Kiwis to keep their cool during the coronavirus COVID-19 lockdown. He’s encouraging common sense and strength.

Adesanya said that this attempt to contain the pandemic will change people’s lives and asked that everyone support each other on a video released on his Instagram account.

It opened with him promising to keep things short and sweet and saying that the next month is going to make some people and break others. He said that certain people will be coming out the other side with drinking and drug problems, domestic violence issues, and possibly even divorce, but that better relationships and making peace is also an option. He said that the next four weeks could be spent learning to cook, exercising our brains and bodies, and more before saying he is no guru, just someone with a few ideas.

The Last Stylebender, as he’s known, who recently defended his Middleweight title against Yoel Romero from Cuba nicknamed Soldier of God, said that his status as a UFC Champion sometimes means that his words carry weight. He urged people to draw on their inner strength to come out of this a little better than they were before.