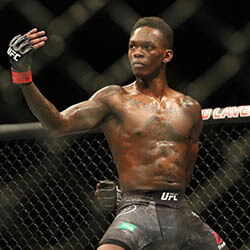 When Ultimate Fighting Championship superstar Israel Adesanya was named Sportsman of the Year at the Halberg Awards, his powerful acceptance speech calling for inclusivity stole the show.

The Nigerian-New Zealand Professional Mixed Martial Arts fighter’s win marked the first Combat Sports athlete’s triumph in this category since 1953, and his acceptance speech was fiery as he called to cancel Tall Poppy culture in this country and to take motivating up-and-coming athletes more seriously.

Adesanya beat out Shot Put athlete Tom Walsh, Professional Racing Driver Scott McLaughlin, and Cricketer Kane Williamson to scoop the award, with McLaughlin probably the next favourite for the honour after his fantastic feats in the Supercars arena recently.

The MMA fighter said that his award was not really his and rather belonged to the next generation of contenders who can now see someone they can relate to being recognised. He said he was proud that a Combat athlete like himself is finally being seen in the same category as teams like the Rugby All Blacks, Basketball’s Tall Blacks, and Cricket’s Black Caps.

He then spoke of New Zealand’s Tall Poppy syndrome, denouncing it, and explaining how when an athlete started making good the public wants to tear him down. He said that this is justified as keeping athletes humble but that it is anything but. He asked the audience to instead support athletes and teams who are doing well because every win they achieve belongs to the whole country.