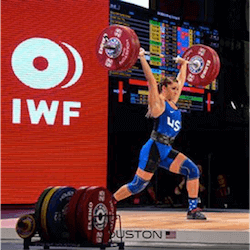 A String of Firsts at the IWF World Weightlifting Championships

The IWF World Weightlifting Championships brings to together the best athletes from around the world to compete in specific weight classes. This year, there have been multiple first-time winners in both the men’s and women’s division. For Korean sports enthusiasts, it was a dream come true as Won Jeongsik become the first Korean athlete to win a world title in the 69kg event. He also became the first athlete to win a world title in both the Snatch the Total in the same (69kg) event since Liao Hui in 2014.

Uzbekistan are known for their heavy lifters and usually compete in the 105kg event. This year was the first time that an Uzbekistan athlete, (Doston Yoqubov) won a world title in a Clean & Jerk event outside of the 105kg weight class. The bronze medal in the 69kg event went to Bernardin Kingue Matam of France for the Total and the Clean and Jerk category. He became just the second French athlete to win a medal in this weight class.

In the women’s division, it was Spaniard Valentin Perez Lidia who was crowned world champion, a title that she can add to her growing list of achievements. Lidia is a three times Olympic medallist and a reigning European Champion. She came out last, easily lifting 110kg then 115kg and finally 118. She then followed it up with an impressive performance at the Total and Clean and Jerk with 130kg followed by 135kg and finally 140kg. With six good lifts, she achieved her dream of becoming world Champ.

The battle for second place in the Total category was fierce. Sitting in sixth spot, Gaelle Verlaine Nayo-Ketchanke had a chance to leapfrog Dajomes Barrera Nessi Patricia from Ecuador, however the French woman missed her final lift at 138kg, giving the Ecuadorian the second place finsih.  Ketchanke did pick up a silver in the Clean and Jerk and a bronze in the Total, becoming the first female French athlete to reach the podium since 1996.

Kiwi pro-powerlifter Sean Withers has been slapped with a 2-year suspension by the New Zealand Sports Tribunal. According to a statement issued by Drug Free Sport NZ, Winters failed a ….

North Korea’s Absence Revitalises World Weightlifting Championships There’s only one sport in which North Korea has a formidable international reputation: weightlifting, in which both their male and female athletes hold ….