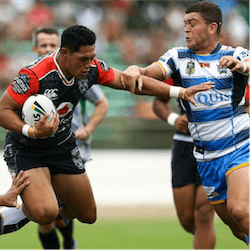 Weekly AFL Game Round Up

We are heading into the final rounds of the AFL. Teams are starting to feel the heat as the top 8 cut looms. The teams that are barely hanging on should provide the most exciting action.

These two rivals clash first this weekend. The Bulldogs are in fantastic from currently and hold the advantage here.

The Giants have the return of Shane Mumford on their side but it may not be enough.

With their tight defence, the Swans will have this one stitched up.

Fremantle does not have the attacking chops to crack the Swans.

Richmond is the favourites in this match after the Cats have lost Joel Selwood, Tom Hawkins and Mitch Duncan.

The Lions have the advantage in this game. The Suns have had a very poor away record and lost 5 of their previous 7 clashes with the Lions.

Not to mention the Suns sacked their coach on Monday night, which does not bode well for this weekend’s matches.

With more top 100 players than any side and a lead in contested possession in the league, the Crows should come out on top in this game.

The Crows have won 3 of their previous encounters with Essendon by more than 80- points.

The Eagles must win this game, fortunately Carton are reeling from 7 straight losses so the Eagles should be able to capitalise and grab the win.

A must win for both sides, St Kilda are coming off a narrow win last week.

There have been many mistakes made on the Melbourne side but they stand a string chance to beat St Kilda the weekend if they can keep their heads in the game.

Hawthorne is still keeping their top 4 dreams alive and will put up a strong battle against Melbourne who is still recovering from losses.

The Hawks should snatch the victory here.

Just out of sheer desperation, Adelaide may come out on top here.

Collingwood have shown that they can challenge teams anywhere on the AFL ladder and Adelaide comes off a painful defeat last week by their rivals the Crows.