Battle For The WBO Middleweight Crown 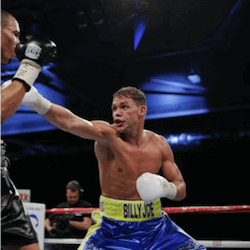 Next week, on the same night that Golovkin and Alvarez do battle for the WBA/WBC/IBF middleweight title, Billy Joe Saunders will be in the ring defending his fourth WBO middleweight crown against Willie Monroe Jnr. Saunders has been out of the ring for nine months now and has changed his trainer in the break. Now that he is back, he said he has a whole new outlook.

When he fought Golovkin, Monroe didn’t even make the seventh round, although this might not be an accurate representation of his present skills. At his last time out, Monroe defeated a fired up Gabriel Rosado, which is certainly something to consider. In December last year, Saunders looked weak against Artur Akatov. If Saunders wants to get into the ring with either Alvarez or Golovkin, he certainly will have to impress on the night.

Saunders is in good shape at the moment, so it is difficult to rule him out based on past performances. He showed an impressive stand against Chris Eubank Jnr, using his incredible accuracy and speed to overcome the big threat. He is a fighter with a lot of intensity and is able to throw a lot of punches. But in order to tap into his potential, Saunders has to be in the right place both mentally and physically.

We have seen in the past that Saunders has had problems putting on weight between fights. Like most boxers, his biggest battle is the scales and not the opponent. Most boxers normally increase to a stone or maybe a stone and a half above their weight. A few years ago, boxers weighed in on the days they fought. This meant that they had to get within a few pounds of the nine-stone limit a few weeks before and hold it.

Today, fighters can be 10 pounds over just three days before the fight. They dry out to get to within the weight limit, knowing they have at least 30 hours to rehydrate. This practice can be extremely harmful to the body. While the various boxing governing bodies are taking steps to monitor weight loss, it is really up to the athlete.

Meanwhile, Monroe knows he is not going up against Golovkin and sees this as the ideal opportunity. He is a tough competitor and one that should not be underestimated. Saunders should have the advantage on the night; that is if he has the discipline to see it through.