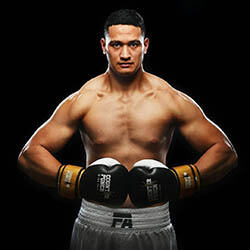 New Zealand pro-boxer Junior Fa will have to make do without the benefit of the sparring services of Nigerian boxer and middleweight champion Israel Adesanya as he prepares for the upcoming heavyweight bout opposite Joseph Parker on December 12.

Adesanya and teammates Carlos Ulberg  and Brad Riddell, who were all due to arrive back in New Zealand from Las Vegas on Monday, have due to a recently introduced managed isolation voucher system been left stranded in the U.S. And since they’ve not been able to secure a space in quarantine until December 15, chances are very good they’ll be spending Christmas day in separation in Vegas.

Even though City Kickboxing lead trainer Eugene Bareman – who stayed behind in Auckland in order to continue to work with Fa – said he’s main concern was obviously with the health and well-being of those fighters stranded in a country plagued by a daily rise in new infections, he was quick to admit the volatile nature of the situation now facing FA and his training camp.

Since both Ulberg and Adesanya were set to fulfil an important sparring function in helping Fa prepare for the fight against Parker, the Vegas isolation dilemma represents a double blow. Even so, Bareman said the plan was to forge ahead at the best of the team’s abilities given the new set of challenges facing the New Zealander.

Bareman added that though the team truly feels for everyone affected by the ongoing crisis, they could not help but consider the entire debacle to have been the result of poor communication and planning.