Bellew Fight Has Been Postponed 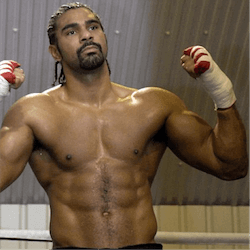 Haye Releases Statement after Pulling Out of Bellew Rematch

David Haye has released a statement after he pulled out of the Tony Bellew rematch. Haye was forced to withdraw from this highly-anticipated rematch with his bitter rival thanks to an injury.

Haye got stopped by Bellew in an exciting and dramatic contest back in March at the London O2 Arena.

As successful punters who followed the fight will remember, it was a nip and tuck one in the earlier rounds, with a calm, selective Bellow possibly getting the better end of things against the wild and slightly uncultured style that Haye was indulging in.

In the sixth round, however, Haye underwent a serious injury to his Achilles, with this wreaking havoc on his overall equilibrium and hobbling him. He was lucky, in fact, to see the remainder of that round out in the face of the furious assault from Bellew which followed.

Despite being heavily handicapped by the injury, Haye displayed amazing courage in the following rounds, not just surviving these, but rather frantically launching bombs in succession at his opponent in a desperate attempt to turn the tide.

This could only continue for so long, however, and Bellew went on to finish the fight in the 11th round, knocking Haye through the ropes and forcing Shane McGuigan, the trainer, to throw in the towel.

Haye needed surgery in order to fix the damage his Achilles had sustained, and months of rehabilitation followed. He remained confident, however, that this problem was behind him, and signed up for a rematch against Bellow back in September.

Recently, however, there have been rumours that Haye once again aggravated the injury to his Achilles, and that the fight, scheduled once more at the O2, for December 17th 2017, was in danger. Eddie Hearn, the promoter for Bellew, said that there was no truth to these whispers, but it has since emerged that Haye is injured, and the fight has had to be cancelled. In a slight twist, however, it is a bicep injury that has befallen him and scuppered the rematch, and his Achilles is doing just fine.

The Statement Released by Haye

The statement that Haye released revealed that he is devastated to call off the rematch, but added that the fight has been postponed to either the 24th of March or the 5th of May 2018, with the date being subject to scheduling.

Haye went on to say that, recent injury rumours aside, he was in peak condition with a very strong training camp, and weighing less than he has for over five years. He said that he was incredibly excited to get back into the ring, hoping to rewrite the ending of the Tale of Haye and Bellew.

Unfortunately he suffered a freak accident whilst completing a stair conditioning session, which he has done many times with no problems arising. He lost his footing, slipped, and instinctively reached out to grab the bannister in order to avoid falling, thus injuring his bicep.