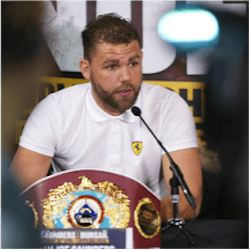 Billy Joe Saunders did just enough to retain his WBO Middleweight title. Extending his unbeaten record to 25-0, Saunders beat no5 challenger Willie Monroe Jr in a 12-round unanimous decision on Saturday at the Copper Box Arena in London. While fans were looking forward to an entertaining evening between two top-fighters, both Saunders and Monroe Jr fought poorly, leaving the crowd and the boxing world wondering if it was even a world title fight.

After the shameful effort by Monroe Jr, it is doubtful that he will be getting another shot at the title. The only reason Monroe was in the ring was because David Lemieux was recovering from injuries sustained from his previous fight. Had Lemieux been healthy enough to challenge, it would have been completely different fight, especially considering that Saunders looked like a man ready to be beaten.

It wasn’t all bad though, Saunders started out well in round 1 and 2, physically taking the fight to Monroe Jr. In round 3, Saunders made a good attack in the last seconds of the round, landing some big shots to Monroe Jr’s head while he was on the ropes. In round 4, the tables turned a bit with Monroe Jr landing a string of decent jabs and lefts to the side of Saunders head.

The 5th saw Saunders trapping Monroe Jr against the ropes and smashing him with a left elbow to the face. The referee decided not to penalise Saunders and Monroe Jr was lucky not to suffer any cuts. Monroe came back in the 6th, landing more powerful jabs to Saunders head. The round was very one-sided as Saunders appeared to be taking a break.

A Title Fight that Lacked Punch

Round 7 was a closer round with a late surge from Saunders. Landing a 4-punch combination, Saunders sent Monroe to the ropes, where he mounted his defence. This was the same mistake he made in the Golovkin fight. Saunders continued his momentum through to the 8th and 9th round with late surges in each. Monroe for his part looked as if he had no drive and was happy for Saunders to steal the round with just a few soft punches.

Perhaps it was the fact that Monroe was only throwing jabs, but Saunders didn’t even fight hard, happy to do just enough to keep the score ticking over. It was a strange way to challenge for a title and it made for poor entertainment. The home crowed showed their disappointment, booing at times as the fight really came down to the fighter who was a little less pathetic. The end result was a unanimous decision for Saunders with the scoring at 117-111, 115-114, and 117-112.