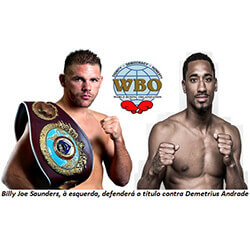 Hearn had recently signed 30 year old Andrade to his Matchroom Boxing USA company with the intention of having all of Andrade’s fights televised on DAZN for US fans.

Hearn told reporters that the original idea would have had Andrade take up a few warm-up fights before having him fight for a world championship title. These plans quickly changed when the World Boxing Organisation ordered that Saunders would need to defend his title against Andrade, and Hearn was left with no choice but to set the fight up.

Andrade can push his career forward in a single leap if he manages to best Saunders for the WBO title. It would put Andrade in the position to fight the winner of the match between Saul Canelo Alvarez and Gennady Golovkin, as well as the financial benefits of beating out veteran Saunders.

While it will not be easy for Andrade to beat the current middleweight champion, Hearn believes that Andrade does stand a chance, and that it will be one of the biggest fights in Boston this year. It will be the first fight in a year for Andrade, with his last fight against Altantez Fox in October last year, but Andrade is remaining hopeful.