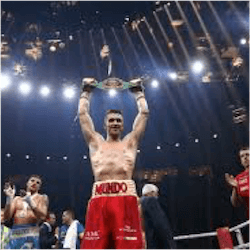 Callum Smith has put down a marker, defeating Erik Skoglund in the World Boxing Super Series opener in Liverpool this past weekend. Smith, who is undefeated in 27 fights, put the Swedish visitor down in the 11th round, giving the home crowd something to celebrate. It was a comfortable fight for him with a unanimous decision of 116-111, 117-110, 117-111.

The opening round proved to be a lively one with both Smith and Skoglund landing key punches. Smith attacked with a quick combination, slamming in a right hook. Skoglund countered, catching smith on the face twice. The fight settled down somewhat as the rounds progressed. By the third round though, Smith started to show his dominance with fierce attacking arrays that went unchallenged. These consisted of uppercuts and straight rights that ended up doing most of the damage.

In the fourth round, the pair traded punches again before the smith landed a straight right followed by a shorter shot that sent Skoglund barrelling into the corner. The Swede came back though and the fifth round saw him land a hard right and an uppercut on smith, leaving the Liverpudlian’s nose battered and bleeding. By the halfway mark, Skoglund was the one pushing forward while Smith was happy to hang back and jab through the round.

Smith Through to Semi-Finals

Having found some holes in Smith’s defence, Skoglund’s confidence grew in the 7th and he continued to push forward. The eighth round was another tit-for-tat ordeal with Smith unleashing his double-up combo. Sometime later in the round, Smith found his rhythm again, landing another double combo with a hard left to the body. In the 10th, Smith was gaining on the Swede, landing an uppercut with another hard left. Another full combo sent Skoglund stumbling, while Smith took the opportunity to land a left hook.

This sent the swede down on one knee. He was up in six but he was clearly in pain. Smith then trapped Skoglund on the ropes but was happy to go the distance with the knowledge that the knockdown alone guaranteed him the win and a spot in the semi-finals. This was only the third time in his career that he went the full championship distance. Smith will now face wither Jurgen Braehmer or Rob Brant for a semi-final showdown.