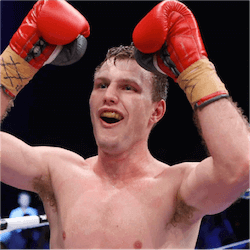 Those in the know have warned of potential dirty shenanigans and the danger of biting ahead of Jeff Horn’s fight with Gary Corcoran.  Some have even dubbed the fight “Brisbane Brawl”.  Jeff Horn’s voluntary defence of his WBO welterweight crown against Gary Corcoran has attracted a lot of attention for the very expectation that this one may not go down a clean fight.

No wonder either, as Horn is notorious for employing alternative bullying tactics such as biting his opponent to try and intimidate and win fights.  Horn’s trainer has gone as far as saying that the only safe exit for Horn will be if the referee is quick enough to take action before too much damage is done by Corcoran.

Undefeated WBO World Middleweight champion Billy Joe Saunders is reportedly putting in the work ahead of his fight with David Lemieux.  Christmas is certainly coming early this year for boxing fans the world over.

Saunders has defeated the likes of Chris Eubank Jr, Gary “Spike” O’Sullivan (at the time undefeated) and Willie “The Mongoose” Monroe Jr.

Our bet is that David Lemieux’s number is up next.

Toney Bellew was supposed to fight David Haye at The O2 on December 17th, but the fight has been postponed to May 5th, 2018 due to Haye having suffered a bi-ceps injury during a training session.  Haye is reportedly undergoing intense rehab ahead of the rescheduled fight.

Bellew was obviously disappointed as well as annoyed at the time of the announcement, saying that he had been looking forward to spending a relaxing time with his family over the holidays, knowing that the fight was in the rear-view mirror.  His mind was now still very much on the fight and would be going into the Christmas holidays.  Bellew promised that Haye would be punished for that.

Bellew went on to explain that he had a clear plan for 2018 and that knocking out Haye as well as Tyson Fury was very much a part of that plan.

Haye, on the other hand, still believes that a victory on May 5 is on the cards for him, despite his injuries.  He also said that he realised that he would be stepping into the May 5 fight with his career as well as his legacy on the line but that he was up to the challenge.