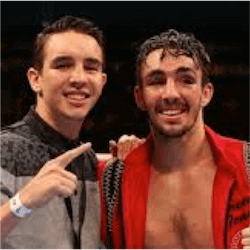 November has been a tough month for the Belfast boxing brothers Michael and Jamie Conlan. The latter, fighting in front of his hometown, failed in his bid to garner the International Boxing Federation, or IBF, super-flyweight belt, and also incurred the first blemish on his perfect pro record until now, when he got rather brutally dismantled by Philippine fighter Jerwin Ancajas on the 18th. The young boxer fought admirably and well, but it was simply not enough.

Jamie got cut and was forced to take a number of counts after relentlessly being battered by the superb southpaw champion. As this was happening, his younger sibling Michael, the two-time Olympian and former World Amateur champion turned white-hot pro prospect, had to watch helplessly in the corner until Jamie eventually fell to defeat in the sixth round of the match. His brother was clearly the underdog and wasn’t able to make any headway back, and was pummelled mercilessly.

Jamie Did His Fans and Family Proud, However

In spite of this loss, there is plenty of reason for young Michael and boxing fans in Ireland to be proud of Jamie.

The 31-year old fighter has established himself as a blood-and-guts warrior of late, making it a habit to display rather mind-bending resilience and enough heart to keep picking up wins under even the most trying circumstances. Although he couldn’t create more drama against the heavy-handed, very talented Ancajas, Jamie entered a typically brave performance, picking himself up off the floor and going back in time and time again.

The Bout Got Waved Off by Ref Steve Gray

When the fight eventually got waved off by Steve Gray, the referee, the older Conlan brother was still on his feet. He had just gotten up from the canvas, but was willing to get right back into the fighting. Gray’s decision to stop the fight and rescue Conlan from his own courage, however, was definitely the correct call.

Michael Expressed His Familial Pride in a Touching Tweet

After the fight had finished, Michael expressed his feelings of pride by sending out a touching tweet accompanied by a photo of the Conlan brothers alongside the triumphant Ancajas. His tweet stated that he had never been more proud of his brother, and also congratulated Ancajas on being a world-class fighter and a champion. He even mentioned their Belfast fans, expressing gratitude for the support that had been offered them, and stated that he was proud to be from that city, as well.

Thanks to this win, Ancajas has moved to 28 – 1 – 1 with a total of 19 KOs. This was the fighter’s third successful defence of his IBF title, claimed from McJoe Arroyo by means of a unanimous decision last September. The one defeat this fighter has suffered, a majority decision loss to his fellow countryman Mark Anthony Geraldo, happened all the way back in March 2012. He has since won 15 matches in succession.