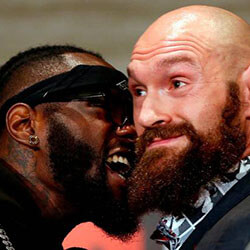 With the year coming to an end, boxing fans are in for one of the biggest events of the season so far at the Staples Centre in Los Angeles. WBC heavyweight champion Deontay Wilder will be defending his title against lineal heavyweight champion Tyson Fury during a time when significant heavyweight prize fights are becoming more rare by the year, and it should be a welcomed treat for many fans.

Wilder (40-0, 39 KOs) will be entering the fight from one of the biggest wins of his career so far after he managed to take down Luis Ortiz in the 10th round of their fight in March earlier this year. Ortiz will also be taking apart on this fight card against Travis Kauffman. Wilder is considered one of the most dangerous heavyweights ever thanks to the power he puts behind his right hand, which has bookmakers leaning toward him as the favourite.

Fury (27-0, 19KOs) is returning to the ring after a three-year absence. He’s also coming off of a pair of sins against Sefer Seferi and Francesco Pianeto in the first action he’s seen since his hiatus, which took place after a decision win over unified heavyweight king Wladimir Klitschko.

Jarrett Hurd is the favourite for the same fight card, with Jason Welborn as the underdog fighting for the WBA, IBF, and IBO super welterweight titles. The Ortiz match against Kauffman as underdog will see them duking it out for their own heavyweight title.