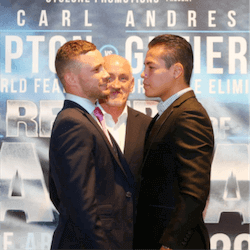 This weekend Carl “The Jackal” Frampton will be facing Andres Gutierrez, with the winner potentially getting a shot at IBF featherweight champ, Lee Selby. The bout is set to be a hard fought one as the two boxers have proven their skill in the ring.

Frampton comes off a 12 round, unanimous decision loss against Leo Santa Cruz in January at the MGM Grand in Las Vegas. It was a significant loss on a big stage yet the fighter seems confident and ready for the upcoming bout if their recent press conference is anything to go by.

Frampton is already thinking of taking down Selby as he was seen at the Selby v Barros fight at Wembley in July. It is good to look towards the future but over confidence can potentially lead to bad decisions.

The 30 year old Frampton comes into the fight with a 23-1 record, his first career loss being the January debacle. His current rankings stand at a #1 WBC, #3 in the IBF and a #3 in the WBA.

Gutierrez is lower down in the overall ranking, but his fight record may be even more impressive than Frampton’s. At 24 years old, Gutierrez holds a 35-1-1 record with an incredible 25 KO’s.

His powerful punches my not help him much against Frampton who knows how to get up close and personal. Gutierrez holds a #12 WBA, #14 IBF and a #8 WBC ranking.

When Frampton lost to Santa Cruz, it was down to Cruz’s adopted strategy. Despite Cruz being deadly on the inside, he decided not to go toe to toe with Frampton whose inside work is near unbeatable. Instead the fighter took on The Jackal from the outside, using his reach to keep Frampton at bay while keeping his score up.

Gutierrez will need to follow a similar strategy, rather than trying to out box the seasoned veteran Frampton. If he can follow through, he may stand a chance.

His only other option will be to take the fight to Frampton and use his powerful punches shown in his 25 KO record to try and take down Frampton. With Frampton’s powerful defence and speed, it will be an uphill battle however.

As things currently stand, Frampton looks set to take down Gutierrez via unanimous decision. With the skill and toughness of both fighters it’s set to be a full 12 round bout.