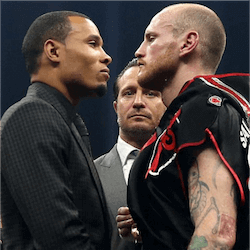 George Groves is Through to the World Boxing Super Series Final

George Groves proved why he is one of the best in the world when he successfully defeated Chris Eubank Jr to sail through to the World Boxing Super Series Final. 29-year old Groves was patient, poised and ready to defend his world Super-middleweight title no matter what Eubank Jr threw at him. Mixing excellent footwork with plenty of counter-punches, the judges scored the fight 117-112, 116-112, 115-113 in favour of Groves.

Despite coming into the match as a world Champ, Groves was actually the underdog according to the bookmaker’s odds. Groves was clearly the more experienced fighter and had Eubank Jr on the floor in the 10th round, but was unable to put him down for good. He also ended up boxing with a suspected dislocated shoulder in the final round, which is a testament to his dogged determination.

Eubank Jr Finds No Way In

From the first round, it was clear that Eubank Jr wanted to box up close. Groves picked this up early on and kept him at bay. Fining no way in, Eubank Jr rushed Groves in the 2nd round only to find a perfect high guard. It wasn’t long before Eubank Jr received a bloody gash above his right eye while still trying to close in on his man.

Groves stepped up the pace in the 7th round with 3 powerful counter-punches. Eubank Jr managed to land a decent left hook buy by the 8th round, Groves began to dominate. While pundits predicted Groves to tire at the end, he was clearly not feeling any fatigue as he landed jab after jab while Eubank ran around in a sort of daze.

Having little left in the tank and looking a bit bloody, Eubank had to gamble and lunged at Groves in the 10th only to be put onto the mat. The area erupted with cries of a knockdown but Eubank hung in there for the rest of the fight, even landing a decent right hand. Ultimately, Groves class and experience won out as the judge’s points indicated a clear win.

The defending champ has now won 28 of his 31 professional fights. Next week, Groves will find out whom he will be facing in the World Boxing Super Series Final when Braymer takes on Smith. His shoulder injury is of concern though and could cause an issue for the upcoming fight.