Guillermo Rigondeaux Retires After 6th Round 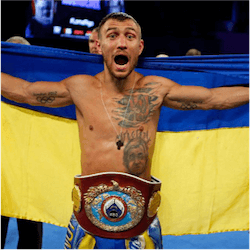 The much-anticipated super-featherweight world title fight between Vasyl Lomachenko and Guillermo Rigondeaux turned out to be a bit of an anti-climax. The betting sites all had Lomachenko as the favourite going in, especially since Rigondeaux was fighting two divisions above his weight. However, seeing Lomachenko completely dominate the Cuban master was bizarre to say the least.

From the start of the second round to the end of the six, the towering Ukrainian thumped his opponent from on high while Rigondeaux kept his head down, constantly grabbing Lomachenko and landing multiple low blows. The Cuban eventually had a point taken away, but by then he was so far adrift that it didn’t actually matter. After going several rounds without landing a decent combination, the Cuban called it quits.

Citing a hand injury, Rigondeaux didn’t come out for the seventh round, giving Lomachenko his fourth title win and an improved record of 10-1 with seven knockouts. Speaking to the press, Lomachenko said it was not a big win for him, as Rigondeaux was not fighting in his own weight category. He did cite the Cuban as a good fighter with great skills, but at the end of the day, he was able to adjust to his style with the low blows and all.

The hype for this fight was understandable considering this was the first time a pair of two-time Olympic gold medallists had ever met in the ring for a professional fight. The result was less spectacular though.

Meanwhile, in another highly anticipated fight, James DeGale lost his IBF super-middleweight world title to American Caleb Truax by majority decision. DeGale had originally planned to use the fight as sort of “homecoming” and a way to re-establish himself at the top of the middleweight pile. Returning from a shoulder injury, the 31-year-old admitted, it might have been premature for him to get in the ring so early.

The Brit found himself in trouble in the fifth round but was able to fight back in the second half. He put on an impressive performance in the eighth while the 11th and 12th were a mix of back and forth from both fighters. By the end it, Truax and his crew felt pretty confident he had done enough to secure a win. The scores came out in favour of the American, 114-114, 115-112, 116-112, while DeGale could see his future crumbling. The Brit immediately called for a rematch, even though there was no clause in the fight contract.