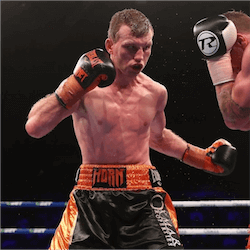 Jeff Horn may be looking towards the future and a matchup with Terence Crawford, but for now, he can be happy finishing off 2017 with a solid victory in his home city of Brisbane Australia. Horn successfully defended his WBO welterweight title against challenger Gary Corcoran, much to the delight of the home crowd in the arena.

While on paper, the two were reasonably even matched, Horn (18-0-1, 12 KO) outclassed Corcoran (17-2, 7 KO) with that little bit extra technical ability and headstrong tenacity we have come to know from the Australian. Acting on the instructions of Corcoran’s corner, referee Benjy Esteves Jr stopped the fight just over a minute into the 11th round.

There were times when it looked like the fight could go either way. Corcoran did the best he could under the circumstances, putting in a brave performance in what was a rough and extremely active bout. By the closing stages of the fight, both contenders had multiple cuts and bruises but it was a severe cut on Corcoran’s left eye that caused the fight to be stopped.

Horn was just the better fighter on the day, putting the 27-year-old Corcoran through his paces. As for Corcoran, he was not able to build any decent momentum, despite constant efforts to take the fight to Horn. By the time the fight was stopped, BLH had the fight tipped in favour of Horn at 98-92.

It All Came Down to the Jabbing

Speaking to the press, Horn said that he knew Corcoran and his team had prepared for the fight. He admitted that Corcoran pushed him to the limit which was not made easier by the fact that he felt his timing was a bit off. In the end though, he managed to defend his title and end the year on a high not.

When Horn was asked about potentially fighting Terence Crawford in April, he was not committing to the idea; although, at this point he may not have a choice. Horn said it is a big possibility. It is really something that everyone wants, and it would most likely happen.