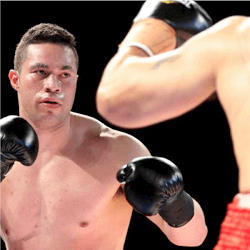 There is an old boxing adage that says that styles make fights, and New Zealand’s heavyweight champion Joseph Parker is convinced that the relentlessly pressing strategy that Andy Ruiz Junior employs as his fighting tactic will play right into his hands when they pair up for the world title bout which takes place at the Vector Arena a week from Saturday.

Ruiz Junior gives away around ten centimetres, and this fact adds to his height-disadvantage, as does the fact that his arms are relatively short. Ruiz Junior has sworn to “press” Parker, “suffocating” with his fighting style, so there will definitely be a chance for the South-Aucklander to punish him as he comes in.

Joseph Parker, in his opening media conference after his arrival from his base in Las Vegas, USA, on Friday, stated that Ruiz Junior’s strength lies in his coming forward with quick hands. Parker went on to say that Ruiz Junior was a “good mover”, “moving his head” and “protecting himself well”. Parker did state, however, that Ruiz Junior will need to work his way in because Parker would be focussing on throwing out “a lot of jabs”. Parker added that Ruiz Junior’s style may well work for him if Ruiz Junior managed to get up close, but that, should Ruiz walk “into a big one” then the night would certainly favour Parker.

Joseph Parker firmly believes that he has the necessary skills to continue to hurt the Mexican boxer, and remains confident that he is able to fight anyone, at any distance. He made it known that he had practiced and trained for any and all eventualities, and was 100% confident about what talents he would be bringing to the ring.

Parker is Happiest at Home

Joseph Parker was attended by John, his younger brother, the latter a light heavyweight set to fight on the undercard. Parker appeared to be very relaxed as he answered the questions put to him regarding arguably the biggest fight of his career to date.

Kevin Barry, his trainer, said that Parker’s training on Saturday was some of the best work the fighter had put in over the preceding seven weeks, and that being home was definitely a factor in his overall happiness quotient. Parker’s work with mental-skills coach Ceri Evans is also earning dividends, Barry stated, and the results of these would be evident in next Saturday’s fight.