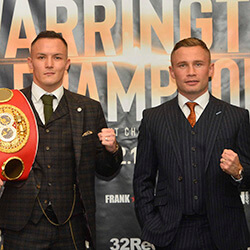 Josh Warrington will be taking on his first defensive match of his IBF featherweight title when he faces Northern Ireland’s Carl Frampton at the Manchester Area.

The news of the fight came just after Frampton’s ninth-round stoppage victory against Like Jackson, where Frank Warren confirmed that Warrington would be making his first defence of his title against the former two-weight champion.

Warrington previously win the IBF title after beating Lee Selby in a split decision within his home city of Leeds and has remained unbeaten in what is seen as his best victory to date. Both competitors have been amicable enough in the lead-up to the fight, but that will most likely go out the window on the night itself. Frampton is currently the slight favourite to leave Manchester with the belt, but Warrington is known as a fighter who defies the odds.

Warrington is coming into the fight as the undefeated champion, with 27 fights and 27 victories, and six by way of a knockout. It took the Leeds-born fighter to his 16th bout before he won inside the distance, with a 12th round TKP over Samir Mouneimne.

Frampton has also had 27 fights in his career, and has won 27 of them in total, with 15 knockouts and one defeat to Mexican Leo Santa Cruz, where he lost the WBA Super featherweight title to the fighter that he beat for it just a year earlier. Victories over Jackson and Nonito Donaire put him in a prime position for the fight.