Manny Pacquiao in Poor Form Ahead Of Big Fight 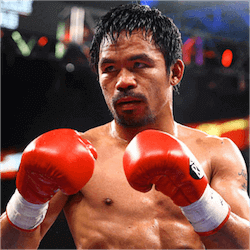 Manny Pacquiao in Bad Form ahead of Jeff Horn Fight

With just a few weeks to go before his Suncorp Superfight, it seems Manny Pacquiao is in the worst form of his career. Well, at least that is the opinion of his trainer Freddie Roach. After putting on a brilliant show for the Australian Media a week ago, Pacquiao seems to have lost his edge and completely bumbled his way through a second day of sparring in Manila. According to his trainer, the sparring session was a complete eyesore.

Speaking to the press, Roach said that Pacquiao’s timing was completely off and his sparring was the worst he has ever seen it. Pacquiao spent a couple weeks training with his friend Buboy Fernandez before Roach arrived to take over the Champs preparation for the upcoming fight. It was believed that Pacquiao took a few days off training before he got into what he called serious fight preparation. Roach has been instrumental in Pacquiao’s career, steering him to his biggest victories.

Now Roach believes that Pacquiao is way behind in his prep, with clear signs of sluggish sparing. According to Roach, the champ will not be hitting his peak overnight. It will be a process to get him back to where he needs to be. Pacquiao went five rounds with two sparring partners and certainly took his fair share of punches. It may be that Pacquiao is far from the fierce fighter he built a reputation around.

A Long Way to Go

On July 2nd, Pacquiao will be back in the ring defending his WBO welterweight title against Jeff Horn (the Fighting Schoolteacher) in front of a crowd of 55 00+ at the Suncorp Stadium. In training, Pacquiao went two rounds against Leonardo Doronio, a fighter with a record of just 15 wins in 32 fights. Doronio landed a couple of jabs and a few left hooks against the champ. Then it was the turn of Sonny Katiandagho who lost a fight to Darragh Foley in April.

Katiandagho went three round against Pacquiao, getting the better of the champ in a couple of exchanges. It almost seemed as if Pacquiao was deliberately letting his opponents take shots at him. Roach told the press that he has warned Pacquiao not to underestimate Horn by any means. There is a reason he is undefeated. According to Roach, Horn can really punch, and has knocked out his last few opponents.