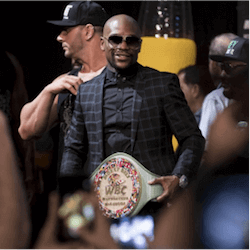 After months of hype and controversy the two titans Floyd Mayweather and Conor McGregor have finally met in the ring. Despite the criticisms that the event was all hype and no substance, it is hard to believe that any fight fan could walk away from the match feeling disappointed.

McGregor outperformed many people’s expectations making it through ten professional boxing rounds against, now officially or at least statistically, the best boxer to ever step into the ring. The match ended on a stoppage in the 10th round. McGregor was not knocked out but he was clearly so fatigued that he could barely keep his arms up and the referee rightly stepped in and ended the bout.

Mayweather did not look like a man who just stepped out of two years of retirement. He stalked the ring like an animal, biding his time against the onslaught of McGregor and striking only when he sees a clear opening. When the match started McGregor was the aggressor. At least one of the attending scoring refs awarded the first three rounds to McGregor who, using his awkward stance and praying mantis like techniques, goaded Mayweather into poor punches and opening up his airtight defence but Mayweather did not bite as easily as McGregor may have hoped.

One thing many fans also noticed was the fact that at many points during the fight the two opponents would gesture and smile at each other even between raining blows upon one another. After the fight the two embraced affectionately.

Conor did encounter some criticism for his regular tie ups on McGregor, especially near the end of the fight, which often resulted in McGregor fitting in a few illegal blows to the back of Mayweather’s head. The referee intervened when appropriate and it seems that McGregor’s muscle memory from his UFC days kicked in automatically.

McGregor’s early fatigue was a big disappointment for many fans. He was very strong and aggressive up until the third round. From here the tables soon turned. Mayweather started attacking and taking advantage of McGregor’s retreat, raining blows on the fighter and landing the most magnificent punches on the MMA fighter.

The clinical precision of Mayweather could not be surmounted by McGregor, even though amazingly he remained on his feet no matter how much abuse he took. This fight was definitely worth the hype and more than that, both fighters walk away with their dignity intact, their pockets lined and with their fans satisfied.