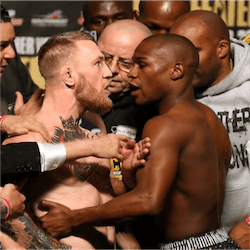 Connor McGregor was always expected to be the loud and brash one in the upcoming match between him and Mayweather. It was shown in his MMA career and most recently in the two’s press tours before their iconic fight.

Most of Mayweather’s responses during their press tour were calm and collected with the boxer’s confidence seeming to be infallible. In a recent interview with ESPN, some cracks started to show however. Mayweather stated that McGregor is a lot younger than he is and he has a definite size and reach advantage. He conceded that on paper, the fight leans towards a McGregor victory.

He went on to say that he is not the same fighter he was 5 years ago, even 2 years ago. He also recalled how Andre Berto managed to go toe to toe with him, when a few years ago a fighter like that wouldn’t have made it as far as he did.

Mayweather added that he is slipping and that he has lost a step since his heyday. Whether this is an honest comment from Mayweather or if it is a tit for tat with regards to McGregor’s fake news warfare strategy, we can’t say. It is however quite a surprising series of statements for the 49-0 fighter.

In another revelation, this time from the McGregor camp, Connor revealed his sentimental side. The fighter showed in a RTE documentary that he carries his grandfather’s hat around wherever he goes. He says he has had the hat with him since he started MMA fighting.

The hat is said to remind the fighter of his younger days in the Crumlin Boxing club where he honed his craft for 7 years as a young man. His grandfather’s hat is there to keep him grounded and never forget where he comes from. That said, his $70 million paycheck might well give him a bit of amnesia.

Horn Vs. Mayweather Not To Be Seen Soon

In another interview with ESPN, Mayweather was asked if he would face Jeff Horn. The young upstart boxer recently surprised the world by taking down Manny Pacquiao and apparently said he wishes to take on Mayweather next.

Unfortunately this fight probably will never materialise, as Mayweather had no idea who the fighter was.

If you are still wondering how much and on who you wish to wager, perhaps the Maloof brothers could help you out.

The two businessmen and former basketball team owners have apparently placed $880 000 on Mayweather to win, with a promise of a massive donation to charity should they prove to be correct. The brothers are potentially earning $200 000 on their wager should Mayweather win. Almost all bets are siding with Mayweather, meaning the potential for value bets on McGregor is growing and growing. You can get your bets in at Sportsbet, where you’ll find great odds for the fight online.