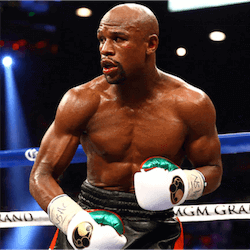 With only 6 more days to go until the two titans, Conor McGregor and Floyd Mayweather meet in the ring, Mayweather has finally given his opinion on McGregor’s sparring videos. He has called out the UFC star for what he calls “rabbit punches” to the back of the head during tie ups, he said he saw allot of grappling, wrestling and illegal moves.

McGregor faces severe financial penalties should he employ any illegal moves. These penalties were stipulated in the contract the two fighters signed for the upcoming event. Additionally the McGregor camp also employ the services of retired referee Joe Cortez to make sure the MMA squad are fully boxing rule compliant

Mayweather also went on to say that he is putting the most on the line against McGregor. Mayweather is risking his 49-0 record with this bout. He has said this will be his last ever fight, but it just may be the one fight he regrets. He is weighing up the prestige of a 50-0 career undefeated record against a potential loss against the younger McGregor.

This will be his first fight in 2 years and he went on to say that once he retires he hopes to build financial stability for his family for generations to come.

Mayweather has also announced that this week, days before he faces McGregor, he will be doing nightly meet and greets at his strip club called Girl Collection.

He has invited fans to join him at the club, claiming he will hold these meetings nightly until Monday the 28th, 2 days after his bout.

Stars of film, media and industry have lined up to get their ringside seats for the 26th August fight. Drake, Angelina Jolie, Charlize Theron, Rick Ross, LeBron James, Elon Musk and more have been announced as attendees.

This week a music video by rock band, The Killers, has been released called The Man. The song was specially written for the fight to serve as the theme song for the event.

If you want to place your bets on the fight, do so at Crownbet, as this online sportsbook is offering great odds.