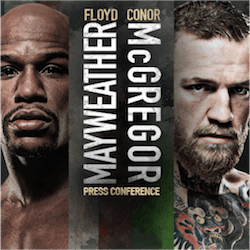 Friday night’s press conference in the SSE Arena for the Floyd Mayweather Jr vs Conor McGregor world press tour shows just how the pressure is mounting between the two fighters. Coming out every night and performing for fans seem to be getting to the two as the slurs and goading took a new turn. It definitely did not dampen the spirits of the thousands of fans in the arena however.

In fact as many as 5000 of the fans in attendance are Irish nationals who have been travelling with the tour to show their support of McGregor. He was in fine form on the night, dishing out the trash talking and at many points looking like he was about to go at Mayweather right then and there.

Even though Mayweather did keep his usual calm and cool exterior, the cracks were definitely beginning to show when he tossed a homophobic slur in McGregor’s direction , calling him a “f****t”. Perhaps this was to even out the score with McGregor who has been getting allot of heat for his apparent racial slurs directed at Mayweather.

Earlier last week, while Mayweather was going through some boxing motions for the camera, McGregor told Mayweather to “dance for me boy”. On Thursday McGregor referred to the third Rocky film where Sylvester Stallone fights Mr T with the help of Apollo Creed, both black boxers, as the film with the “dancing monkeys”.

While their conflict may be setting back race relations hundreds of years, it has not done much to dampen the hype for the upcoming fight which is already selling ring side seats for $10 000.

The current odds still widely favour Mayweather to win. Fans have been staking wagers offered at 11/2 in favour of McGregor. He has received a lot of fan support from Canada, Britain and of course his home country of Ireland.

Mayweather also had some choice words for Dana White, head of the UFC, calling him McGregor’s pimp and referring to McGregor as his “b***h”. This followed McGregor’s remarks about the boots that Mayweather were wearing. He called them high heels and then called Mayweather a “stupid, baldy t***”.

Current Odds On The Fight

A draw is currently rated at about 40/1 and you can get your bets in online at Crownbet.