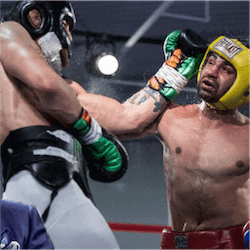 A few weeks ago former boxing champ Paul Malignaggi was revealed as Conor McGregor’s new sparring partner to help him brush up on his boxing chops, then last week Malignaggi shows up for an interview with a black eye, now it comes out that Malignaggi has quit the McGregor camp in pretty acrimonious circumstances.

Joe Cortez, the veteran boxing ref that has been assisting McGregor in his training revealed to a local radio station that he had to physically separate the two fighters during routine sparring bout as things were getting so heated between the two. Perhaps because Malignaggi has previously stated that if he had to fight McGregor he would “knock his beard off”.

Malignaggi explained further in his podcast that he did have some unresolved issues going into the training bout and that he gave McGregor a hard 12 round sparring session that got “very dirty”. Unfortunately things took another bad turn when Gerard Byrne from the McGregor team posted an image on Instagram of Malignaggi on his back and McGregor towering over him.

Malignaggi of course did not respond in kind, making multiple social media posts demanding that the team post the full unedited video of the fight which he knows the UFC recorded. Malignaggi has now separated from the McGregor camp, meaning that they are now without a professional fighter to set the bar for his fight with Mayweather.

Meanwhile more social media revelations turned out to be fake news. Videos emerged stating that Floyd Mayweather was arrested and that the upcoming McGregor vs Mayweather bout was cancelled.

It turned out that the footage was taken from Mayweather’s 2010 arrest for domestic violence and simple edited to look like a recent event.

The Mayweather camp has not made any comment on the fake news article but debunking website, Snopes, has published detailed information on the fake article and cleared up much confusion from fans.

Betting Is Getting Crazy

Even though Malignaggi stated that McGregor “whimpers like a girl” when he takes body shots, it hasn’t changed the fact that many bookmakers are now reducing the odds on McGregor losing the fight. It seems the McGregor hype train is accomplishing what they have set out to do.

In fact, betting fever has gotten to former heavyweight with the UFC, Brendan Schaub who wagered that McGregor will last the full 12 rounds in the upcoming match. He stated that if he loses the bet he shall be sending a picture of his genitals to all the contacts in his phone.

Unfortunately most bookies will not accept this bet, instead you will find that Mayweather is still the favourite with many bookmakers offering even money bets on who will win the first round by KO. Get you bets in at Sportsbet and see whether you can predict which fighter takes the title.