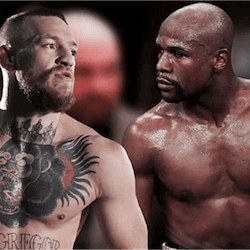 After showing up in an interview with a black eye, McGregor’s sparring partner, Paul Malignaggi apparently made his most revealing comments this week. The former WBA champion said that when McGregor punches Mayweather, he would definitely feel it.

He did however compliment McGregor’s accuracy. Whether we should be taking these comments at face value is up for debate. This is the second time that someone close to McGregor has seemingly revealed privileged or damaging information.

McGregor went on to post a picture of himself training with Malignaggi, but sporting a pose that wouldn’t look out of place in a bad action movie. These may simply be tools in McGregor’s cerebral assassination of Mayweather. Or he may simply be insane. You can bet on one of the two being the case at Sportsbet, an online sportsbook that’s offering great odds on this fight and many others.

Speaking of Instagram posts, Floyd Mayweather’s ex partner has spoken out against McGregor. He posted a photo on Instagram last week that was a veiled comment on Mayweather’s domestic abuse arrest in 2010 after he attacked Josie Harris, now his ex.

Mayweather spent 2 months locked up and their 3 children saw the whole ordeal. Harris has released a public statement saying that domestic abuse is not something to be used in promoting the 26th August matchup between these two fighters.

With the cheap tickets starting at $3500, sales have not been great for the upcoming match. Hundreds of seats are still open and many fans are hoping that the ticket prices will be brought down.

VIP tickets are going for $15 000 and it seems that Mayweather wants to fill the 20 000 capacity venue to try and improve the ridiculous $72 million gate receipts for his fight against Manny Pacquiao two years ago at a 16 000 seater venue.

Even with all this swirling around in his head, Mayweather still found some time to say a few kind words about his opponent.

Mayweather was speaking to an online boxing publication and he stated that McGregor is not a bad person. He said that if he is number 1 then McGregor is definitely number 2 because he has heart. He went on to say that the only thing he knows about McGregor is that he is a warrior.