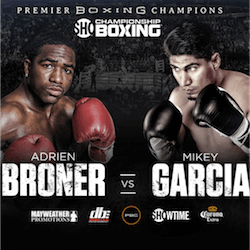 This coming Saturday sees a very intriguing matchup between Mikey Garcia and Adrien Broner. These two fighters are quite unique and it is quite tough to predict who will leave the ring victorious.

The bookmaker favourite at the moment is Garcia. Despite a two year gap in his career between 2014 and 2016, he came back strong and won his first two fights returning to professional boxing.

Garcia took down Elio Rojas and Dejan Zlaticanin very convincingly. Most fans were surprised by how confidently he stepped back into the ring after such a long absence.

With his 36-0 record and technical boxing skill set, it is clear why he is the favourite in this match. Bookmakers predict that Garcia will be picking apart Broner and win by stoppage.

When Broner first started boxing there were high hopes stacked on him to be great but unfortunately Broner has turned out to be just a good boxer. His 33-2 record should not be taken lightly and he will have a 1 inch reach advantage on Garcia.

The fact is that Broner has faced much bigger and stronger opponents than Garcia and lived to tell the tale. He also has much more to prove than Garcia.

It is debatable whether Garcia will have the power to put Broner down for the count, but then again it is also debatable if Broner will be able to go toe to toe with Garcia using his power and brawling skill set.

He did not let his losses define him and he took three wins directly after them. If Broner has his head in the game and delivers on the promise he once showed on Saturday, Garcia may wish he stayed retired.

The main event is joined by Jermall Charlo vs Jorge Heiland. Charlo , 25-0 , is the favourite against Heliand , 29-4-2, in this match. Charlo is coming off a streak of wins and should have momentum on his side.

Four time Olympian Rau’Shee Warren faces McJoe Arroyo.  This is a evenly matched fight with both boxers coming off a loss. Warren never won a medal in the Olympics and Arroyo is a tough fighter that could easily withstand Warren’s technical assault.

Finally, Jarrell Miller will be fighting Gerald Washington in another evenly matched fight, with both fighters clocking in at around 300 pounds; some heavy blows will land here.

Get your bets in at Crownbet and wager on the fighter you think will win.