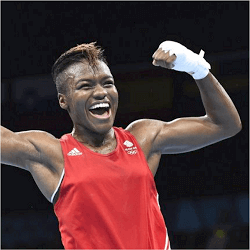 British boxer Nicola Adams this week found out that she will be receiving the OBE in 2017.

This is thanks in part to her gold medal at the Rio Olympics in boxing, but also due to her work as a supporter of women’s rights and gender equality.

This will be Adams ‘second gold medal after she won her first in the 2012 Olympic Games. She was the first woman to win an Olympic Boxing Medal. She is also currently a multiple flyweight champion, Holding Olympic, European and Commonwealth titles.

A Winner On All Fronts

After her first gold medal she also received the Independent’s 2012 LGBT person of the year award.

Adams had a difficult start in women’s boxing. She has been boxing since she was 13 but even after winning English Amateur Boxing titles and getting a silver medal in the European Championships, she still had to take on extra work acting on television and even worked as a builder due to lack of funding for her boxing career.

It was sonly in 2009 that she received funding from the International Olympic Committee to pursue her career further that she once again got a chance to shine in the ring. She went on to win gold in the European Union Amateur Boxing Championship in 2011.

After her 2012 gold in the Olympics, she won her gold in the common wealth games against Michaela Walsh.

The OBE will not be her first honours form the Crown. In 2013 she received an MBE for her work in boxing. In 2015 she also received an honorary Doctor of Law from the University of Leeds.

Openly bisexual, Adams will be celebrating the OBE announcement with her girlfriend, Marlen Esparza. Esparza is also a boxer who fights in the same class as Adams, so in theory these two lovers could face each other in the ring.

It is not known what is next for the boxer, but she is said to be strongly committed to expanding women’s boxing and encouraging more athletes to start taking part.

She has represented England internationally on multiple occasions and with her stunning career so far, she has competed from Ningbo in China to Rio de Janeiro in Brazil. She has won a total of 4 silver medals and 8 gold medals. She is not just one of the most celebrated boxers from England, but also one of the most decorated fighters ever to come form the isle.

She is sure to keep raising the profile of women’s boxing in the New Year and beyond.