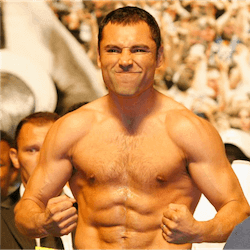 Oscar De La Hoya, he of the Boxing Hall of Fame, is confident that he will still have no problems handling himself in the boxing ring. Although the fighter is nearly ten years into his retirement, he has stated that he has been training on the sly, and issued a call out to Conor McGregor, the Irish UFC superstar.

De La Hoya, past his prime at 44-years of age, stated on the Golden Boy Radio with Tattoo and the Crew, a digital daily radio show, that it was a known fact that he was very competitive, and that he knew he still had the ability to fight well. He added that he was faster than ever, as well as the strongest he’s ever been, and that he was confident that he could take McGregor out in two rounds. He went on to say that he would come out of retirement for that fight, and confirmed he was calling McGregor out!

De La Hoya publicly considered a comeback in June of 2015, but changed his tune a week later. He is a gold medal winner from the 1992 Olympics, a ten-time pro world champion, and captured titles in a range of weights: 130, 135, 140, 154, and 160 pounds. He won fights against fellow Hall of Famers Julio Cesar Chavez Senior, twice; Pernell Whitaker; and Arturo Gatti. He has also appeared in the ring against other greats, with that list including Hector Camacho Senior, Floyd Mayweather Junior, Felix Trinidad, Shane Mosley, and Manny Pacquiao.

But He Has Been Out of the Game for a While

De La Hoya has not been in a fight since he dropped a one-sided eight-round knockout loss to Pacquiao on the 6th of December 2008. He went for a total of 39 – 6 with 30 knockouts in his career, however, and got inducted into the International Boxing Hall of Fame in 2014.

De La Hoya Has Fought Inside and Outside the Ring

De La Hoya has also famously battled serious drug and alcohol addiction, having gone into various rehabs a number of times, but he confirmed in his radio interview that he was doing very well.

This is a very different attitude from De La Hoya regarding Conor McGregor being in the boxing ring. When the 29-year old UFC superstar lost in a tenth-round knockout to Floyd Mayweather Junior on the 26th of August this year, crossing over from mixed martial arts to boxing, De Lay Hoya called the whole thing a ridiculous farce. Ignacio Nacho Beristain has now delivered commentary on De La Hoya’s changed views, too!

The Hall of Fame trainer feels strongly that boxing deserves more respect than the legends De La Hoya and Pacquiao are paying it in their callouts to McGregor. He believes that their actions are disgraceful, and that it is a simple fact of looking for easy money from boxers who should know better.