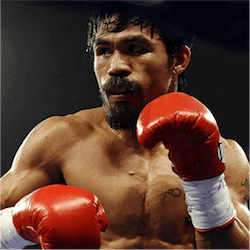 This Sunday sees the showdown between the now legendary Manny Pacquiao and the relatively green Jeff Horn. The fight will take place on Horn’s home turf at the Suncorp Stadium in Australia.

Paquiao is the open favourite for this match and his record shows why. Manny has powered through 59 fights with only 6 losses. In comparison Horn has had a flawless streak of only 16 fights.

If Horn were to stand victorious he would need to not only outlast the veteran, but outbox him which many challengers have attempted to do and found themselves on the losing end of unanimous decisions.

On the other hand, Horn is known for his power and Manny has not won a fight by knockout since 2009. In his last 5 fights the boxer has always come out on top through judge’s decisions.

Some critics are concerned that Pacquiao may not be in top form. Other than the fighter getting older, he has now become a senator in his home country and many feel that he can’t be at his best with a full time job on the side.

That said, he has won his last two fights that were held last year and he did not show any signs of weakness or fatigue. His most recent loss was to Floyd Mayweather in 2015. Since then he has won all his scheduled fights.

The Case For Horn

Fans of Horn have a handful of arguments to make for the fighter saying he is bigger than Pacquiao and is physically more imposing, although that did not really help Chris Algieri. Horn and Algeri are also younger than Pacquiao, which did not seem to mean much when Pacquiao took Algieri apart.

Horn also competed in the 2012 Olympics but was beaten by Denys Berinchyk from the Ukraine in the quarterfinals. He also took part in the World Amateur Boxing Championships in 2011 where he lost out to Everton Lopes.

Horn has not competed on an international level where we can accurately match him up to Pacquiao, on paper it seems the young boxer will be routed this weekend, but that may be his only strength. No one expects the fighter to be able to hold a candle to the WBO champion and he may be set for an upset victory. But more than likely, not.