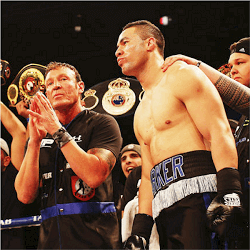 Joseph Parker has been crowned the new WBO Heavyweight Champion of the World. Parker is the first New Zealand born boxer to ever claim a world heavyweight title, and despite his opponents’ camp saying they were robbed, it’s clear that Parker won fair and square. New Zealand also made history, as it was the first time the country had been host to a world heavy weight title fight.

Parker took on Mexican Andy Ruiz Jnr. in Vector Arena in front 10,000 boxing fans, and there were plenty of prominent names in the stand to witness the occasion. Outgoing Prime Minister John Key and incoming PM Bill English watched the fight, as did politicians such as Winston Peters, Su’a William Sio and Judith Collins. Samoan Prime Minister Tuilaepa Sailele Malielegaoi, an avid boxing fan and huge supporter of the sport was a guest of honour, as his country had a hand in sponsoring the fight.

There were also plenty of sporting greats in attendance, and current All Black selector and World Cup winner Grant Fox, Sir Graham Henry and Manu Vatuvei were also spotted.

The night kicked off to a great start for Parker’s camp, as his younger brother John won his first undercard fight in a unanimous points decision, setting the stage for his brothers victory.  John beat Ash McConville in every single one of his four rounds, sending the Christchurch native packing.

Big brother Joseph kept an eye on John and watched his fight from the ringside, swapping places later to take on Luiz to claim the WBO title.

Fight promoter Dean Lonergan was thrilled with the way the event had played out, and said that the Auckland venue was just 120 people short of being completely sold out. He said that it was an historic day for New Zealand and for boxing, and that having Parker win was just the cherry on top.

For Lonergan being able to host a heavy weight title on home ground was one thing, but to have a local boxer win was, in his words, enough to put him in a state of rapture!

Tickets for the event were hot property and the fight was screened on pay-per-view. Sports books also cashed in hugely on the event with some massive wagers on Parker to win being placed. Both fighters were considered in with a chance, and punters seemed very split on who would end up the winner. Those who wagered on Parker to win would have had a very good Sunday!

As World Heavyweight Champion Parker looks set for an interesting 2017, and New Zealand boxing has certainly been given a boost.