Psychological War Between McGregor and Mayweather 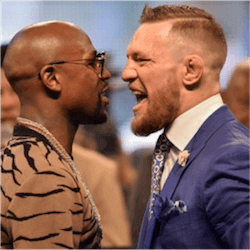 Even though there were no press conferences this week for the upcoming Floyd Mayweather Jr vs Conor McGregor fight, it doesn’t mean it wasn’t another week packed with drama and hype for the event.

While appearing in an ESPN television interview, McGregor sparring partner Paulie Malignaggi had a clear black eye. The former WBA welterweight champion declined to reveal any information on his sparring with McGregor other than saying it is going well.

While Paulie certainly is not on the level of Mayweather, he is able to provide a good measure of McGregor’s readiness for his upcoming August bout.

It was revealed to much surprise this week that Floyd Mayweather has been secretly dating British reality TV star Abi Clarke. The Essex native has been receiving harassment both in public and on social media from McGregor fans.

Friends of the star claimed that Clarke was confronted by youths in the street last week and was on the receiving end of sexist abuse for dating the boxer.

In even more shocking developments, she also received a brick through her home window with a note attached that said “F*** the Mayweathers”.

Clarke is said to have been very shaken after the event. McGregor’s fan base have shown in the past that they can be very passionate as was seen in the US press tours for their upcoming fight where more than 5000 McGregor fans have been following the spectacle around in its country wide tour and showing their support for the MMA fighter.

McGregor continued his psychological warfare with Mayweather via social media last week when he posted a picture of himself wearing the nr 23 jersey of the Golden State Warriors basketball team.

The jersey was a dig at Mayweather as it belonged to former Warrior CJ Watson. Watson had a relationship with Josie Harris, the mother of Mayweather’s 3 children. Mayweather spent 90- days in jail after an assault on Harris in 2010.

The dig however was missed by current nr 23 for the Warriors, Draymond Green, who commented that the Warriors were supporting Mayweather in the upcoming fight, not McGregor, to which the MMA star retorted that he doesn’t know who the “F***” Green is because he doesn’t give a “F***” about basketball .He is only interested in “dribbling heads on the floor, not balls”.