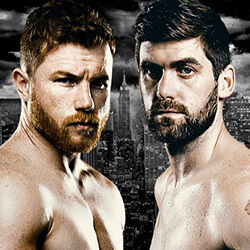 Trainer Jamie Moore has stated that Rocky Fielding must gain Saul Alvarez’s respect by making use of his size advantage.

Canelo, who is a Mexican superstar, will be stepping up a division to challenge Fielding for his WBA regular super-middleweight title. Moore told reporters that Canelo has underestimated him and doesn’t realise how big or good the fighter is, and that the problems that Canelo will have to overcome are height and reach, and he will have to make up the difference with length.

Fielding won a world title for his 28th fight against Tyron Zeuge in Germany earlier in 2018. Canelo will be entering the fight in Madison Square Garden, New York, as holder of WBC and WBA gold at middleweight after battling with fellow pound-for-pound star Gennady Golovkin. The first was ruled as a draw, and Canelo went on to the win the rematch thanks to majority decision.

He has also notably knocked out Liam Smith and Amir Khan, outpointed Miguel Cotto, and only lost to Floyd Mayweather in 2013.

Moore believes that Canelo deserved to lose both fights to Golovkin, however, and has hope after watching the combined 24 rounds. He stated that Rocky is naturally rangier and bigger, and that Golovkin had success in closing the distance, which they will be using to map out their game plan. He finished off by saying that elite-level boxers have little room for error, and the big thing is that it’s important to take the small opportunities when they present themselves.