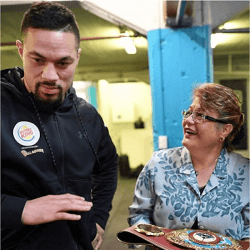 Sala Parker, mother of Joseph, has stated that she isn’t shocked by the fact that once her son enters the boxing ring he transforms from a gentle man into a force to be reckoned with. This is thanks to the fact that she and Dempsey Parker, Joseph’s dad have sat ringside for her 24-year old sons’ 52 amateur and 21 professional fights. She has been quoted as saying that she and her husband have always insisted that their children do their level best at whatever task lies before them, and that this has become an especially important charge for Joseph because of the risks that his profession entails he take. This is particularly true for the upcoming WBO Heavyweight title fight against Andy Ruiz Junior, which lies ahead at the Vector Arena in Auckland.

Mrs Parker has said that she firmly believes that any success requires a lot of hard work and, very often, an accompanying tough attitude. The 50-year matriarch will kiss and hug her fighting son as he enters the ring for the Ruiz clash, and hope and pray that Joseph Parker’s long physical and mental preparation, training under Barry, will not only keep him safe but deliver success as well.

Mrs Parker appeared alongside her son in the Sky TV documentary on the upcoming bout, A Fighting Chance, which aired last Thursday, and which is set to screen during the week leading up to the fight.

Mrs Parker joins her son as he discusses his early fights, which took place when he was a teenager. One clash finished with a bloodied nose; a defeat; and a valuable lesson for Joseph: he hadn’t adequately prepared for the bout, and felt the consequences. Mrs Parker’s message to her son was crystal clear, she says, and she warned him that unless he started training properly she would forbid him for pursuing his interest in boxing.

Her Herald interview revealed that her advice to Joseph consists of putting his practice to work when he steps into the boxing ring, and that she keeps an eye on how he is doing as he trains. Because of how closely she monitors his progress, she is able to quickly tell whether he has managed to move forward or if his pace is slackening. She says that whether or not he has been honest about his training is quickly apparent, and he is unable to hide the effects of not properly adhering to the demands his training makes on his time; body; and mind.