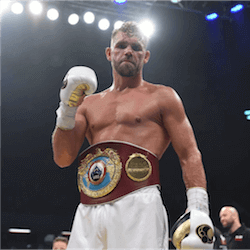 Britain’s Billy Joe Saunders has successfully defended his WBO middleweight title against Canadian David Lemieux in Canada in this past weekend. 28-year-old Saunders had an easy time of it, winning by unanimous decision and trumping every single one of the judges’ scorecards. The official scorecard read 120-108, 117-111, 118-110. Now, with 26 unbeaten fights under his belt, Saunders has publicly called for a unification fight against Gennady Golovkin.

Speaking directly to Golovkin via the press cameras, Saunders said if Golovkin stepped into the ring with him, it would be a different story, he would be punching fresh air. As for Lemieux, the Canadian won all four of his fights since Golovkin took him down in the eighth round back in 2015. Up against Saunders, the Canadian had no answer to the sheer power and speed of the Brit, conceding his fourth win of his career.

Fighting for the first time in Northern America, Saunders completely unwound the home favourite. His agility and astonishing footwork was too much for Lemieux to handle, who was actually no slouch himself. Using a combination of jabs and uppercuts, the Brit landed a massive combo in the fourth before drawing boos from the crowd when he taunted Lemieux for missing a shot.

Lemieux Outclassed in Every Round

Saunders continued to punish Lemieux round after round, leaving him bruised and bloodied after a flurry of jabs. Saunders won every single round of the bout on one of the judges’ scorecards and was so dominant that the end result was read by the crowd long before the bout ended. Speaking to the press after the fight, Saunders said he is the type of fighter that looks easy to whip, easy to put down but no one can hit him. About fighting in Canada, the Brit said he likes to come to someone else’s back yard as it makes him into a better fighter.

In the build-up to the fight, Saunders said that he had actually fallen out of love with boxing since he was not able to face any of the top names in his division. Saunders may just get a crack at Golovkin though. The Middleweight world title is the only one that Golovkin hasn’t yet won and will most likely be contemplating the idea of a unification fight in 2018; at least that is what Saunders hopes.