Glasgow Hyped For Taylor vs. Davies 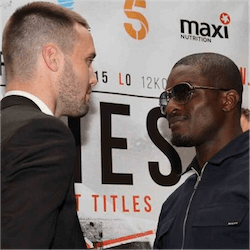 If Twitter is good enough for the American president to air his views, it certainly is good enough for two talented boxers to use to fuel their rivalry. The upcoming clash between Josh Taylor and Ohara Davies has been preceded by name calling and self promotion on Twitter by the two fighters which has lead to the event being billed as “Bad Blood”.

When it comes to the two fighters’ statistics you can understand why they are so hyped to face each other and why the event has generated so much media attention. These two fighters are both at critical points in their career. They may not be at the peak of their powers yet but both fighters have shown that they have very promising careers in the industry.

Taylor turned professional in 2015 and since then he has won 8 of his 9 fights. Davies is a year younger than the 26 year old Taylor but he has already racked up 12 knockouts from 15 fights and he is still undefeated. He currently holds the WBC Silver Championship and with good reason.

Taylor on the other hand is the current Commonwealth Super Lightweight champion and looking to climb the career ladder with his first high profile fight of this nature. Shane McGuigan, former champion and Taylor’s trainer, has been focussing on his endurance training. He emphasised the importance of Taylor being able to absorb the onslaught from Davies.

The fight undercard includes a series of exciting bouts lined up for the weekend showdown. The event is set for the 8th of July and the headliners will be joined by the unbeaten female boxer, Chantelle Cameron in her second ever-professional match.

She has impressed many with her power and composure, but she is facing Polish boxer Bojana Libiszewska, a 27-fight veteran with a hard as nails reputation. This fight will be the polar opposite of the main event with a rising star facing a seasoned veteran.

Hopes are high for the main event card this weekend in Glasgow. On paper it seems that Davies will have the edge with his power and experience but the more composed Taylor may be able to out-box the brash fighter.