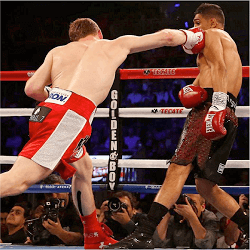 Boxing’s a sport that can always throw up surprises in the ring, and it’s full of athletes fuelled by testosterone and aggression, so they deliver plenty of shocking moments out of the ring, too. If there is any doubt that this still holds true, just take a look at our Top Three Shock 2016 Boxing Moments:

The WBA, WBO and IBF light heavyweight title fight between Kovalev and Ward in the T-Moble Arena, Las Vegas, was always going to be close. But Olympic champion Ward spent a good deal of time early on in the bout crouched in defence, being outpunched by the Russian nicknamed Krusher. In the second round, Kovalev even put him on the canvas; only the second time in his career Ward has suffered this indignity. He was up before the count, but the Russian hammered him through the third, fourth, fifth and sixth.

A rally from Ward began in the seventh, and he landed a few blows that rattled Kovalev. But the latter rallied strongly in the final rounds, and we reckon the final points tally was 115-112 to Kovalev. The three ringside judges, however, gave the win and the title to Ward unanimously: all three scored it 114-113 in his favour. Understandably, Kovalev fans felt they’d been robbed in a ‘hometown’ decision.

Nicholas Walters Quits in the Seventh Round

The HBO junior lightweight title bout between Ukrainian Vasyl Lomachenko and Jamaican Nicholas Walters in Vegas fizzled out horribly for fans. It was a mismatch from the start, and Lomachenko proceeded to hand out a pounding seven-round boxing lesson to his opponent. At the start of Round 8, the Jamaican refused to continue and forfeited. For boxing fans who reckon you have to give your all before you quit, it was a shock that left a bitter taste.

In a move we’d expect more in WWE, British heavyweight Dereck Chisora flung a table at opponent Dillian Whyte at a press conference on December 7. He was fined £25,000 with costs, given a two-year suspended ban and saw the British title pulled from his upcoming bout against Whyte.

It’s not the first time Chisora has provided the shock of the season: he’s bitten opponents in the ring, and slapped and brawled with others at press conferences; usually followed by a slew of fines, suspensions and revoked titles.