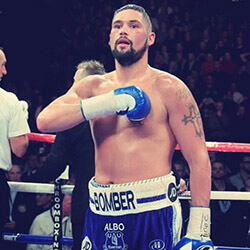 Tony Bellew has told reporters that he believes that his match against David Haye will not last long, claiming that Haye will go down within eight rounds of starting. He’s since stated that Haye, “should have stayed clear of him.”

Some believe that this will indeed be Haye’s last match, and that he will most likely retire if Bellew outmatches him. This comes 14 months after a match between Bellew and Haye where Bellew managed to take down his opponent in round 11, and caused Haye some injury. Despite this, Haye remains confident, stating that he’s in much better condition now than he was 14 months ago.

Bellew has gone on to say in reply, “I’ve got a good boxing brain and I can adapt and adjust to any situation. If I used my brain and I make the right adjustments at the right time I’ll have rid of David Haye before the eighth round.”