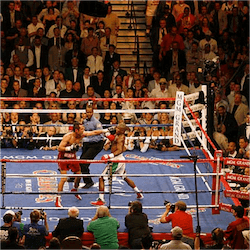 This weekend sees two must watch fights taking place on the 17th and on the 18th. First up on the 17th is Tyron Zeuge vs Paul Smith. The two boxers will clash for the WBA Super Middleweight Title.

Tyron is the defending champion with a so far stunning record of 20-1. The young fighter is a fan favourite to keep his hard won title. If his recent performance is anything to go by, he may be in for a hard night as his form has slipped ever so slightly.

Paul Smith on the other hand is hungry for a win after a series of lacklustre fights himself. With a 38-6 record, Smith has the edge over Zeuge in experience.

The fighter has challenged the world title on two previous occasions but failed to carry through and lost to Arthur Abrahams on points during both occasions. Smith has yet to win any meaningful fights in the last 4 years.

The Ward And Kovalev Rematch

The next night sees Andre Ward face Sergey Kovalev on the 18th. This is a much anticipated rematch between the two heavyweights. Their last meeting saw Ward walk away the victor. He retained his WBA, WBO and IBF light-heavyweight belts but the fight was very close. Ward won by a unanimous points decision but Kovalev in press conferences chose to focus on the fact that he knocked down Ward in the second round.

The two fighters are pretty evenly matched with regard to age, height and number of fights and victories. It should be noted though that Kovalev won 26 of his 32 fights by way of knockout, whereas Ward won less than half of his fights the same way.

With his second round knockdown and KO history, Kovalev has certainly shown that he has the power to deliver on his threats to Ward. Ward will need to use all his technical skills to keep Kovalev at bay while he either wears him down or racks up the points.

Critics have said that because of Ward’s close victory, Kovalev has a lot more motivation to come after Ward and claim his title. Ward however brushed off any criticisms and stated that he will be making his victory a much more decisive one than the points decision of their first bout. These two fights will be ones to watch for fight fans this weekend and anyone loooking to wager on them can check out the odds and markets at Sportsbet to see what’s on offer.