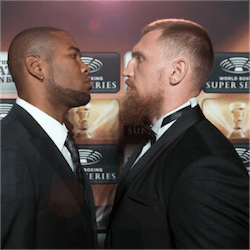 After two weeks of quality fights in the inaugural World Boxing Super Series, Kiwi sports betting fans are looking forward to what promises to be the biggest clash of the tournament so far. On Saturday night, San Antonio’s Alamodome will host the first US leg of the 2017 WBSS, with the main event being the WBSS cruiserweight quarterfinal between Cuba’s Yunier Dorticos and Russian Dmitry Kudryashov.

Both boxers are 31, and both have won 21 fights in their pro careers. However, Kudryashov has won all 21 by knockout, prompting some commentators to call him ‘The Knockout Artist’, whereas Dorticos has only 20 knockouts in his 21-win tally.

On the other hand, Dorticos’ 21 wins came from 21 fights, whereas Kudryashov lost by TKO to Nigerian boxer Olanrewaju Durodola in November 2015; his only defeat in 22 bouts. Despite his nickname, ‘The Russian Hammer’, he may find himself outmatched in San Antonio.

Most boxing enthusiasts are expecting a hard-fought, closely matched contest, but online sports betting sites aren’t quite as equivocal. The Cuban is the odds-on favourite to win, at $0.50 and lower on most sites. Kudryashov is being offered at around $1.75.

Dorticos has an advantage both in height and reach over his opponent, and he’s seeded fourth overall in the tournament. Nevertheless, the Russian will be no pushover, and he’s made it clear that he’s going into the fight with every intention of winning it, so a bumper bout looks on the cards.

The winner of Saturday night’s quarter-final will go through to the WBSS semis in the cruiserweight bracket, where he will face either Russia’s Murat Gassiev, or Poland’s Krzysztof Wlodarczyk. They fight their WBSS cruiserweight quarterfinal in New Jersey on 21 October.

Ukraine’s Oleksandr Usyk is already through to the cruiserweight semis as well, after beating German Marco Huck in their QF, and he will face either Latvia’s Mairis Briedis of Cuban Irish émigré Mike Perez next. In the super-middleweight bracket, England’s Callum Smith is the only fighter through to the semis so far, after he beat Swede Erik Skoglund last Saturday.