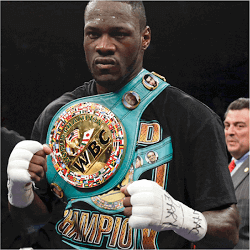 His opponent is the talented Polish boxer Andrzej Wawrzyk. Wawrzyk is coming off a six fight winning streak. He is currently standing on a 33 for 1 record.

Wawrzyk previously failed to win a match against Alexander Povetkin for the WBA title three years ago. The Pole’s recent strong showing has made him confident in his upcoming match against Wilder.

He may also have an advantage over Wilder. Wilder has been recovering from a broken hand and bicep damage since July. This will be his first fight since he sustained these injuries in a title defence against Chris Arreola. The match was stopped after 8 rounds, with Wilder finishing on top.

Prepping for a Big Fight

Wilder has a very impressive 37 and 0 record, with 36 of those victories by knockout. This fight may be in preparation for a rumoured unification match against Anthony Joshua.

As a former Olympic medal holder, Wilder has powered through the boxing rankings. With 4 successful title defences under his belt, he is a favourite to win the match on the 25th of February.

There is a lot riding on this matchup for Wawrzyk who has much to prove and everything to lose.

In Pursuit of a Polish Record

If the fighter manages an upset he will become the first Polish holder of the Heavyweight Championship.

Wawrzyk is very motivated for the fight, stating that he has trained all his live for this match against “the most dangerous man on the planet”.

The 29-year-old Wawrzyk was unbeaten in his first 27 professional fights and has won victories over talented fighters like Frans Botha, Denis Bakhtov, Danny Williams and Devin Vargas.

The match for the WBC title takes place in Deontay Wilder’s hometown of Birmingham. Mayor William Bell stated that the city is proud to be hosting Wilder’s 5th title defence. He sees the fighter as an ambassador for the community of Birmingham.

The event will be broadcast as the main event of the Premier Boxing Championships on FOX and also FOX Deportes. It will be Wilder’s third primetime network television event after his last event against Chris Arreola.

Wilder won the WBC title in 2015 at the age of 31. The fight on the 25th of February will be his 9th hometown showing since becoming a professional boxer after his stellar Olympic performance that earned him a bronze medal and national acclaim.