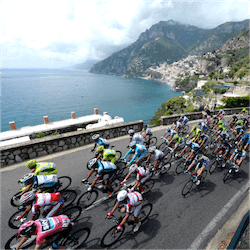 The 2017 Giro d’Italia, set to start in Sardinia on 5 May, will be the 100th edition of the iconic cycle race, and it is sure to attract plenty of online betting from New Zealand’s road cycling fans. For the special anniversary, race organiser RCS Sport has added a number of special features.

These include new designs, by Santini Maglificio Sportiva, for the famous pink jersey worn by the race leader: the maglia rosa; as well as the blue maglia azzurra for the best mountain rider and the white maglia bianca for the top young rider.

The organisers have also created a special centenary route for the Corsa Rosa. It stretches over 3,572km, with opening stages in Sardinia and Sicily, before crossing to the mainland for a tour up Italy that criss-crosses the Apennines, before taking on the Alps and then heading east into the Dolomites. The race ends on 28 May in Milan.

There are plenty of mountain passes, like Blockhaus, Passo de Mortirolo, Umbrail Pass and Monte Grappa, to test riders on their climbing skills in three mountainous stages and six mountain-top finishes. The sprinters aren’t forgotten, though, as there are also a number of flat stages, including the final leg. This is a 28km time trial that will see riders race to the finish at Milan’s Palazzo del Ghiaccio.

Colombian cyclist Nairo Quintana, who rides for Movistar, is one of the stars New Zealand betting fans will be considering for the Giro. He showed excellent form when winning the Tirreno-Adriatico race earlier this month, and is now training back home in Colombia.

The mountainous terrain of his homeland is probably the best preparation he could get for the Corsa Rosa, as well as the Tour de France in July. He will need to be at peak fitness to follow through with his declared intention to compete in both races this year.

It will be quite an achievement if he can pull off the double; only seven riders in history have won both the Tour de France and Giro d’Italia in the same year, although legends like France’s Bernard Hinault, Belgium’s Eddie Merckx and Italy’s Fausto Coppi each managed the feat several times. The last cyclist to win both in one year was Italy’s Marco Pantani in 1998.