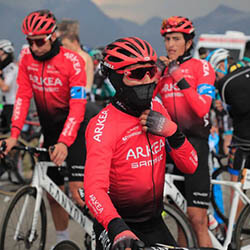 Several reports recently ran by members of the French media alluded to two persons apparently closely involved with the squad currently being detained for questioning. The two riders in custody for questioning have in the meantime been part-identified as a former Giro d’Italia champion and a Vuelta a Espana champion. Cycling body the UCI has now confirmed that it has been in contact with OCLAESP, which is a special public health unit set to work alongside the investigation currently underway by French judicial authorities.

Arkea-Samsic team manager Emmanuel Hubert has in response to a wave of questions following the going public of the existence of the investigation said that the raid involved only a few riders and their immediate entourage – members of entourage apparently not employed by the cycling team. He did however add that even though the team fully supported its individual riders, it had no intention of tolerating any doping practices and will, if necessary, take the necessary measures needed to sever all links with parties found to have been guilty as charged.

Marseille prosecutor Dominique Laurens was earlier this week quoted by members of the French press as having confirmed the discovery of several “health products”, which products reportedly included medicine stashed away in personal belongings. Of primary concern was reportedly the discovery of a “method” that could potentially qualify as being somehow connected to doping.