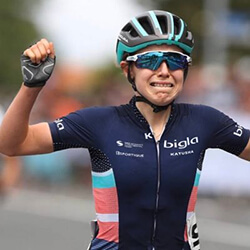 A champion cyclist from New Zealand, Niamh Fisher-Black, has been forced to turn to crowdfunding to save her professional career after she fled from the Italian red zone.

2020 was supposed to be the year that Fisher-Black, who hails from Nelson, became a professional cyclist after she signed with the Bigla-Katusha Women’s WorldTour team. But the Swiss squad’s future is in grave danger after two of its title sponsors withdrew their funding. This is thanks to the effect that the novel coronavirus COVID-19 pandemic has had on their business.

Fisher-Black survives on a salary below minimum wage in New Zealand to cover her expenses and said that this latest bad news came as a huge shock. She said it was a massive blow, especially in terms of her future, adding that everything is already uncertain, but this latest news has made it far worse.

She said that they would already have been scraping through to get enough money together to get back to racing if and when the season starts up again. Fisher-Black called hearing that your team is unstable and not knowing if they will make it through this devastating.

The 19-year old moved to Italy in February this year, catching a flight there mere hours after she won the women’s road race at the NZ Championships. But it wasn’t long before Fisher-Black had to escape back home just before the country went into lockdown and all her upcoming races got cancelled.