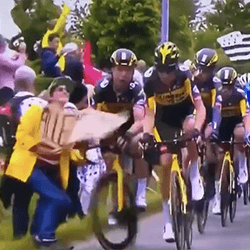 Following the massive crash that saw the Tour de France making headlines for all the wrong reasons, French law enforcement officials have finally tracked down the sign wielding bandit.

After standing in the road with a sign and causing an obstruction in the road for cyclists, the mystery woman appeared to have vanished from the face of the Earth. She had been holding a sign in support of her grandparents that are assumed to have been part of the race. Understandably, causing an international incident like that on live TV would have anyone hiding from the world.

Of course, fans next to the road with signs is a given for any major race, however, this should be done in a manner that is safe to all involved.

The woman had a cardboard sign of support, and in an attempt of getting some time on international TV, decided to step into the road and bring almost the entire peloton to a standstill. Unfortunately, she was facing a camera and not the riders, causing quite the commotion. Riders and spectators alike have taken to social media to voice their frustrations.

Since the incident, an investigation was launched to find the woman. Police interviewed dozens of people that had been close to the scene in an attempt to narrow down the search. Witnesses were called to step forward as well. In addition to local law enforcement seeking to take action, race organisers will also be suing for damages.