2016’s Cycling moments that took your breath away 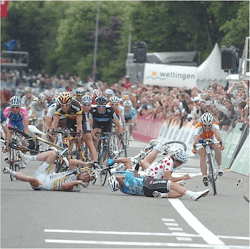 2016 Cycling Moments that Took Your Breath away

No doubt you have your own list of 2016’s cycling moments that took your breath away. Geraint Thomas achieving the biggest win of his career in the Paris-Nice race in March, by just four seconds, was one of our favourites. He’s only the third Briton to conquer this race.

In all racing sports, though, it is often the crashes and pile-ups make the biggest impression on a year, and cycling is no different. There were three wipe-outs in particular that stood out; two with disastrous consequences, and one with an amusing happy ending.

Fabian Cancellara in the Paris-Roubaix

If he’d clinched the Paris-Roubaix, it would have been a fourth time for the cyclist they call Spartacus. He’d have equalled the record currently held as a tie between Roger de Vlaeminck and Tom Boonen.

Unfortunately, he was brought down by what may have been spilled oil on the ruthlessly hard pavement. Fans were shocked to see how heavily he went down, but he picked himself up and continued, eventually finishing 40th.

He was three minutes ahead of the general classification with three stages to go, and it looked like the LottoNL-Jumbo rider was set for a surprise underdog win. That was until he hit the snow at the side of the road and saw his bike go base-over-apex into the tarmac.

Kruijswijk managed to leap off unhurt, but the time he then had to waste getting the bike back into riding shape cost him the race.

Leave it to Australia to provide us with an example of how a bit of matiness can help things along. US sprinter Farrar suffered a crash that crippled his bike during the Tour Down Under in January. New Zealander Anthony Tooman had flown to Australia specifically to ride in the race, but he didn’t hesitate to offer his bike to the stricken American.

When it turned out that Farrar’s cleats wouldn’t fit the bike, Toomey swapped shoes with him too, allowing Farrar to finish the stage. That’s lump-in-the-throat stuff, right there.